A downloadable game for Windows, macOS, and Linux

There's no denying you're a villain, and so far things have been going just dandy.

Unfortunately, the hero's about half an hour away from your secret base and he's looking pissed.  Endgame pissed. It's time to stop playing around, get organized, finish your evil plots, and become the final boss you've always dreamed of.

This game was built after discussions had on the podcast "Woolie Will Figure It Out". There's no plans to release a full game, but experimenting has resulted in an interesting, if somewhat simple prototype.

So I made an account just to comment on this. I listened to about 3/4th of the podcast on my commute and it peaked my interest. I very much liked the concept itself and was excited to see there was a build where I could see it.

I do recognize this is a prototype so I'm not going to judge this as a complete game, but i figured it might help to go over what I liked and didn't like.

The base interface of the game is simple but is fine for this game since it's supposed to be a very quick kinda "see how many different results you can get" kinda affair, so I don't think you need to do much more than that.

I liked the dialogue you get with certain choices, the best one by far being the "apply clown makeup" once since I saw that effect the startup dialogue for the battle as well. That seemed to be the choice that had an effect I enjoyed the most, even if it was just getting to see additional dialogue.

I like the idea of the heroes changing based on your choices. I thiiiiink this might be slightly buggy since I got one path where it said something along the lines of "The Hero is wearing None" but again, this is a prototype.

One problem I DO think should be addressed is the battle at the end. In most of my runs the battle dragged on for quite a bit and honestly it was the least fun part of the game to the point where I stopped reading the battle flavor text. Granted it's supposed to read like a typical RPG battle, but it's not fun to click through that without user input for more that like one or two "rounds" of the battle. Like if there was dialogue during the battle or if the battle was kinda fudged so it gets to the end result or the unique dialogue mid or at the end of battle super fast, then it would be fine, so it is fixable. Again, it does mess with the kind of "this is a JRPG" aesthetic a bit but getting to the more interesting bits faster there I feel like would be a MASSIVE improvement.

So those are my thoughts. I did 4 runs, did not succeed as of yet but I enjoyed the concept enough that I wanted to run through it a few times, see what would change. In a completed polished state, I feel like a lot of people would play this as a curiosity since it is quick and would be fun to see what variants exist, so I do hope there are future builds of this just to see how polished this can get. Good work so far. Hope my comment was helpful.

Hey, thanks for the feedback.

Regarding the interface, our original idea had this big interactive area you could walk around, but having a menu makes things a lot easier for replays. The only thing I'd really change is replacing the vertical text buttons with custom icon buttons for each action, but that's just part of making the UI pretty in general.

The heroes' description changing based on your actions is indeed non-functional at this point. One of the bigger challenges is figuring out how to change the heroes based on your choices. The most functional system I can imagine is a limited number of outcomes for each villain, with multiple paths to them. For the heroes, having 4 of them means there's a lot of combinations possible. The story events would have to be dictated by which hero is the party leader. Even with that system, by having every action modify/mutate stats and skills is small ways, every playthrough would be at least somewhat different from the last, without needing hundreds of villain/hero combinations.

The battles are definitely tricky to maintain interest in, which is why I'd consider giving the player control over their villain. If there were more benefits to multiple playthroughs, I think it would justify itself.

Duuuude the whole podcast I was practically screaming that there totally is a market for something like this! It's like the entire princess maker series of games where you make decisions and choices that influence how they evolve and change into different types of leader with different relationships with the world! Tweak it a bit so the "character elements" add some stat it quirk that would effect battle and you now have not only a story by also a tangible purpose to the decisions and gameplay! Maybe a half hour isn't enough for real depth like those but a proper full size princess maker with a villian instead of a Loli could probably be moderately successful!

After listening to the concept on the podcast, I actually enjoyed toying with it a bit. I'll agree with Plague on many points, but also like this idea. I will say it does require visuals beyond the robots, but that's where the chaos comes in. The game is very quick to complete and I did 4 runs in just a few minutes, one of which I won. Art would definitely save it, but ultimately it is a fun time killer. 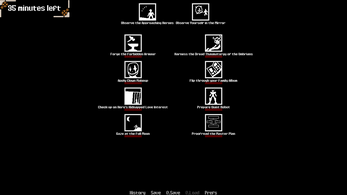